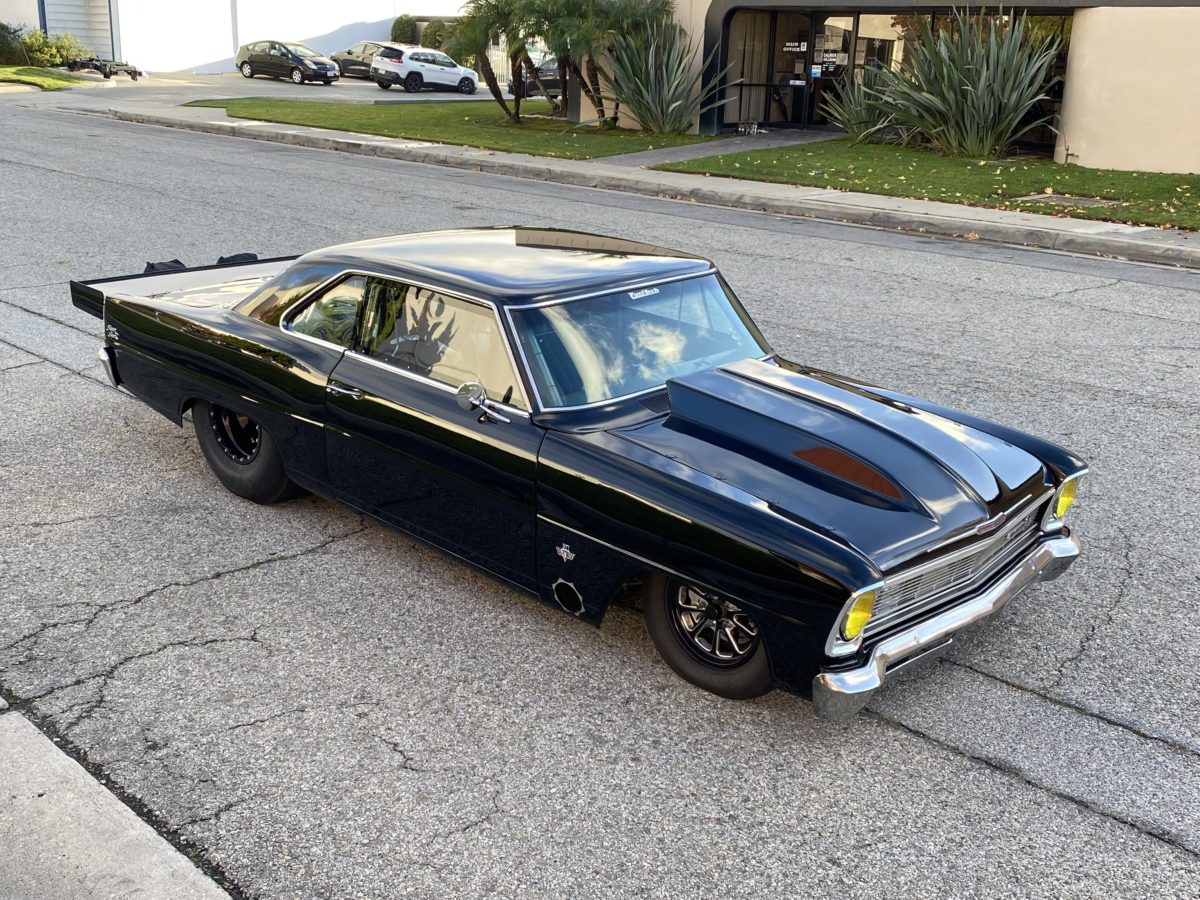 The events of the week leading up to Drag Week 2021, featuring a very messy shop and an emergency haircut!

I’d like to start this update by saying a huge thank you to all our customers for their patience whilst we took a little working hiatus. Thankfully they are all very cool guys and were just as excited as we were to see our ’66 Nova race car build finally get underway!

Stefan and I originally planned to bring the Nova back to the shop at the beginning of August. It was August 23rd by the time we had crated and shipped out the last two completed engines and had a little move around in the shop to accommodate the car and the bodies that would be surrounding it during the next few weeks.

I’ll set the scene – It’s Thursday 9th September 2021 and we had planned to to depart California for the 30+ hour drive to Michigan yesterday. Drag week starts on Sunday morning, the 12th. Three days away and a drive that takes over one and a half of those days.

The Nova build has been ongoing during weekends and evenings for most of the year. Since June, our fabricator Chad, has been helping Stefan on evenings and weekends, with placement and mock up of the engine, turbos and fuel cells, in order to build the headers and weld the firewall and any framework, tabs, etc, that were required.

Covid-19 has caused a lot of back logs for our industry on a whole over the last 18-months but, although everything that could have been ordered in advance, was ordered in plenty of time, unfortunately, no amount of planning and organization will ever cover all the little hiccups in a build this extreme. Parts coming from the East coast were stuck on a freight train arriving a week later than expected, incorrect measurements of custom items, wrong spec of hoses supplied, and an extra days’ wait for last minute items to arrive due to the Labor Day holiday. These mishaps all added up and took it’s toll on our timeframe.

Hot Rod Drag Week is covered by 1320 Video and many other media outlets and YouTube enthusiasts. With this in mind, I scheduled a long overdue and impromptu hair cut for Stefan at the shop.

I also made him a makeshift bed for a couple of nights and told him not to leave the shop until the Nova was finished!

The time is now 10:30pm and I went home to fetch our bags which were packed days ago; the guys gather together to check the to-do list and establish if we really can complete the build in time, or if we should call it quits.

The last two weeks have seen us working 7 days a week, 15-20 hours a day, with very little rested sleep. A good friend offered to drive us to Michigan so we could catch up on sleep during the journey. This generous offer meant we could leave at the very latest about 10am Friday morning. We were about 12 hours away from that deadline, Stefan and our four friends/helpers decided to give it a shot and reconvene at 2am. Could we collectively and realistically get the Nova finished to leave in the next 8 hours, for Drag Week ’21? The answer the second time round, was a resounding ‘no’.

To say Stefan was gutted, would be an understatement. Attending Drag Week has been a dream for a very long time. A lot of planning, time, blood, sweat and (almost) tears, had gone into this build.

Alongside the defeat was also a sense of relief. We each knew we had made the right decision before collectively agreeing. A car that hasn’t seen the street, let alone the track for five years, being driven by a driver running on very little sleep, un-tested, capable of 3000hp+ and running a low 6, a complete rebuild from the bottom up, everything upgraded, ‘no stone unturned’ besides the body and some of the chassis; would’ve been a huge and potentially dangerous undertaking.

We now have a Nova that’s more than 98% ready to go. More ready than it has been since it was last raced and stripped of the small block Chevy in 2016. The 3000hp+ LS engine is in and running. Just a few more bits of fabrication to complete and we are ready to take the car off the stands and go for a test drive.

We aim to test at our local track over the next few weeks and perhaps sign up for some drag events before the new year. We are very much looking forward to attending Drag Week 2022 with a fully dialed car and plenty of street testing miles behind us. Tom Bailey has also announced a new event – ‘Sick Week’, which will be a similar drag-and-drive event in Florida, expected to run in February ’22. This has certainly got our attention!

We would like to say a huge thank you to our sponsors, not only for their top of the range parts and craftsmanship, but for believing in this build as much as we do.

And to our friends:

Brad Lagman at QMP for his machine work & advice.

Nick Evdos at BTR for the badass Hydraulic roller camshaft.

Jerome for his electrical & plumbing expertise.

Moises for making the brake lines and providing the last minute tools.

Eugene for the fabrication help.

Andrew Calkins for making a new HD wishbone for us with measurements Stef gave him from 400 miles away.

Andrew Peterson for being on standby as co-pilot for the week.

Scott Breckenridge for spare supplies and diagnosing a faulty master cylinder on the last day.

Andrew for the haircut.

For staying up late with us. For laughing with us through the delirium, sharing both the stress and the victories. And for making our ’66 Nova Drag ‘N’ Drive car a reality!

Beadlock assembler, feeder, parts runner and the other half of ACE.